Written by Cristhy Yau
Updated over a week ago

You can schedule a LinkedIn Live broadcast in Socialive up to one week in advance. By scheduling a broadcast, you are creating an automated public post on LinkedIn announcing your upcoming broadcast. This post will include a Remind Me button that your followers can click to guarantee they get a notification once the broadcast begins.

This article will go over the following topics:

To broadcast to a LinkedIn Event page, you need to be:

As soon as you schedule your live broadcast, an announcement post is published to your Page, letting your followers know there’s an upcoming broadcast. People who see the announcement post can click Remind Me to receive a reminder notification shortly before the broadcast begins. 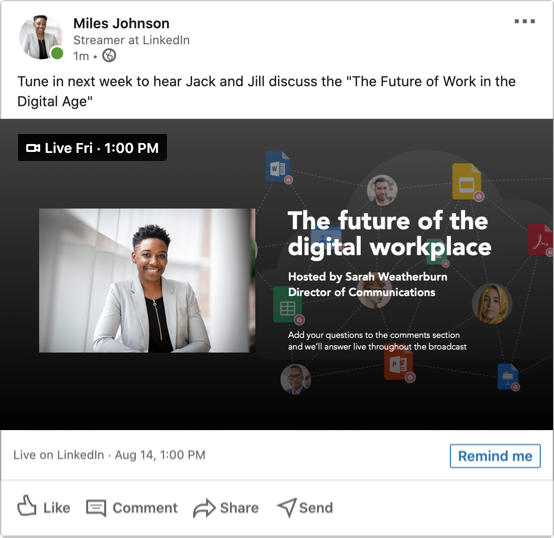 Please keep the following in mind:

At the scheduled time of the live broadcast, people who expressed interest via the initial announcement post will receive a notification directing them to the broadcast.

After the broadcast is complete, the post will remain on your page or profile, but the live original announcement post will turn into a video post.

You can cancel your scheduled LinkedIn broadcast by deleting the announcement from your LinkedIn profile or page.

Still, looking for an answer?

Contact Socialive Support via live chat or email at support@socialive.us.